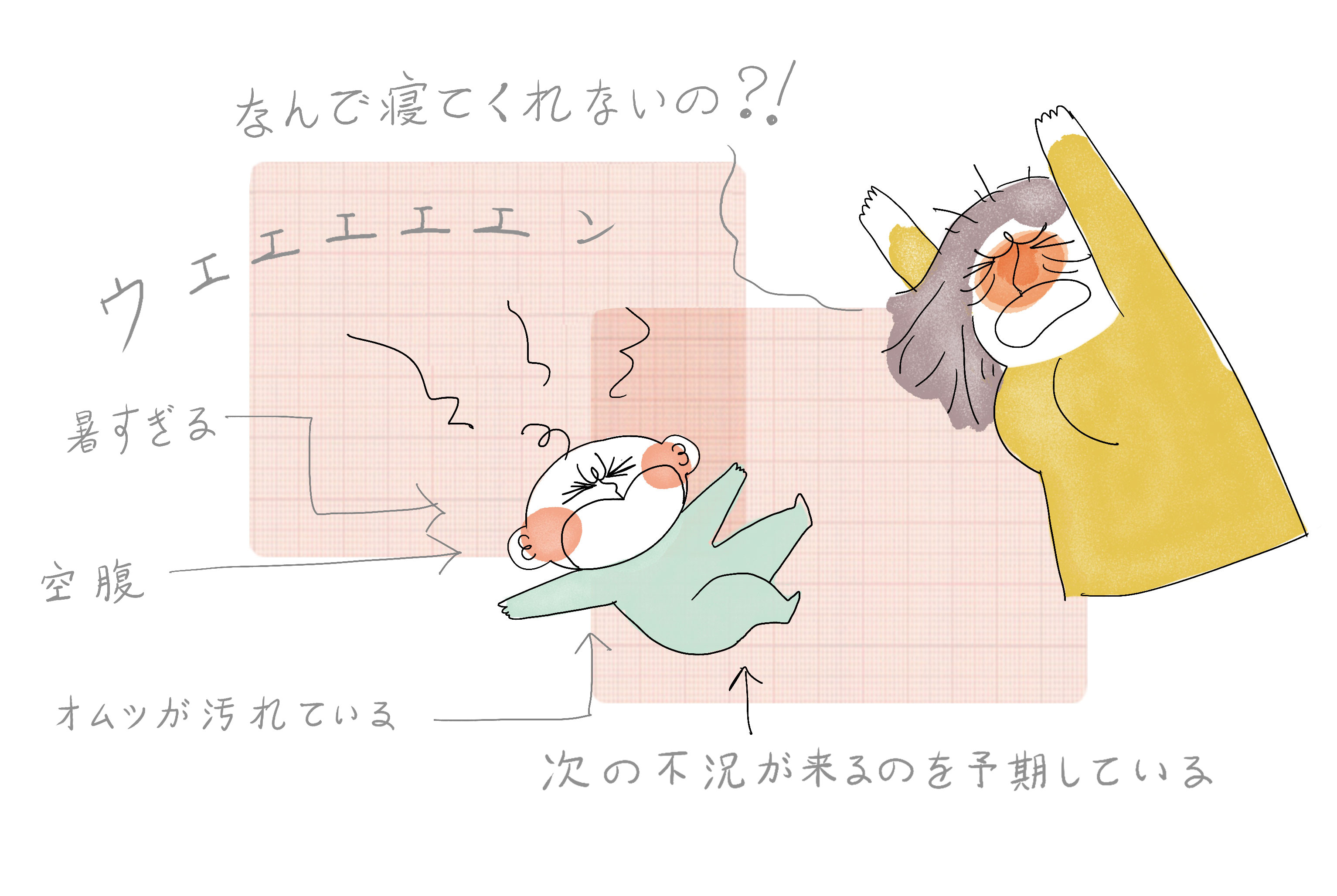 You baby has been here for 10 minutes and you feel like he sleeps more than he lives – and it’s not just an impression. He doesn’t have a biological clock yet! As a result, he can’t yet tell the difference between night and day, so he sleeps all the time (and it’s great).

His sleep cycles are very short: they’re about 50 minutes each, and they only have 2 phases : agitated sleep and calm sleep that allow him to respectively develop his neuronal system, get back his energy and grow (a howling baby is a baby hard at work).

At that age, your baby will only sleep when it pleases him, by spans of 2 to 4 hours. His waking hours are guided by his primal needs (hunger, need to urinate, etc), but he may also awaken between two sleep cycles… for no reason.

If everything goes well and you haven’t noticed any other distinctive signs (fever, irritation, hunger, hot or cold, dirty diaper, etc), your child just needs some help falling asleep.

Swaddling is the art of wrapping a baby inside a blanket to reduce his movements. This technique reminds the baby of the womb, where he was hugged by the uterine walls, and comforts him. It has been used since the dawn of time to calm upset babies. This is the same reason babies prefer narrow cribs.

Just like during your pregnancy, if you drink coffee, tea, or other stimulants, during your nursing sessions your baby will receive the caffeine or the theine that you ingested (by the way, pay attention to what you eat in general, baby will get all of it by proxy). Not such a great idea to drug your baby !

Taking the baby out of the bed every time he wakes up to reassure him will quickly become tiring. Don’t turn on the light and don’t play with him – it will only wake him up more. Prefer the age old method of singing lullabies and whispered words to calm him. Sometimes, he will fall back asleep on his own – it is important to let your baby have a few minutes to see if it is a brief awakening and if he can go back to sleep on his own. 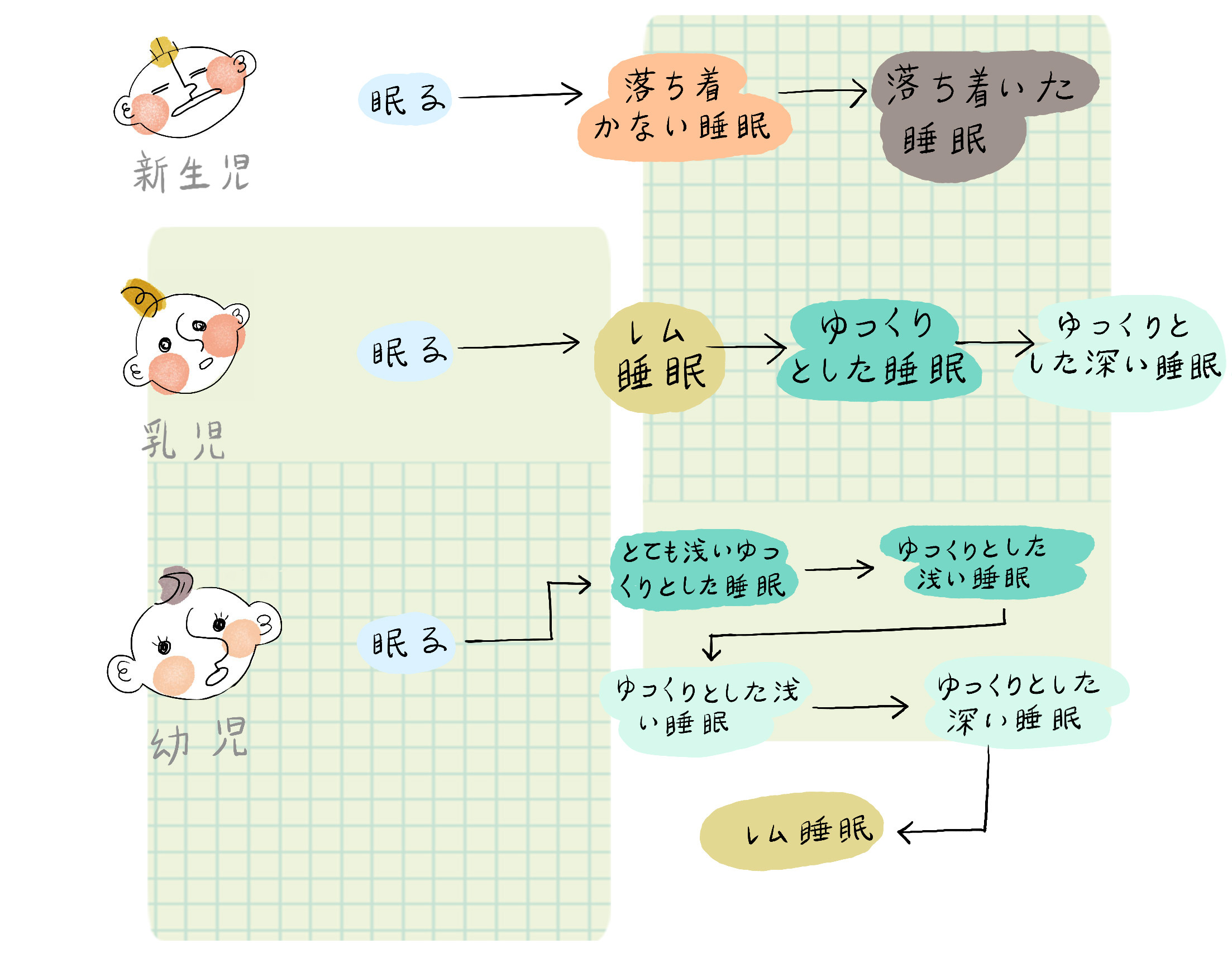 Your baby is starting to recognize his surroundings a little. As of now, he has a biological clock and many phases of sleep : light sleep, deep sleep, and paradoxical sleep. It’s the age of sleepless nights: the child is conscious of his environment and will start to test his limits. He can be afraid of nightmares or simply scared of being alone.

Put a ritual in place (a hug, a bath) at a set time that you will repeat regularly so that your child will be groomed to sleep on command.

Avoid having him fall asleep in your arms or on your chest: he might become unable to fall asleep without you, which will give you more work than you already have…

From 4 months onward, your baby will be able to comfort himself. From 7 to 9 months, he will start feeling separation anxiety (a normal stage in his development), but it doesn’t mean you should let him cry by himself for hours – drop by to reassure him regularly with your voice or a cuddle, and he should go back to sleep.

Thanks to his new biological clock, your baby needs landmarks to fall asleep. Train him so that he always associates darkness to sleep and light to the excitement of daytime, and his body will get used to it quickly. 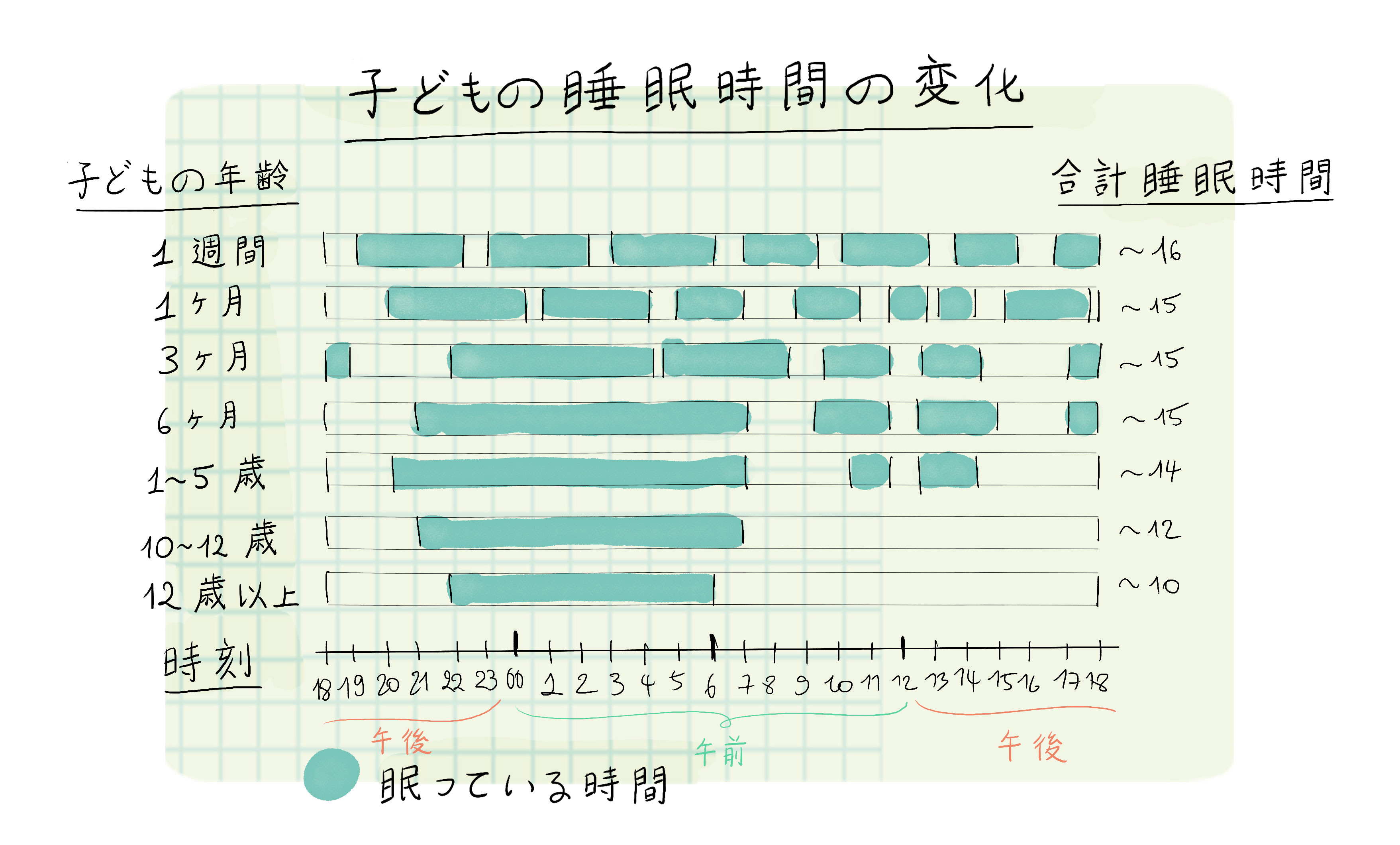 When he is five years old or younger, your child is too young to know that he should stay in bed and try to sleep. If you put him in a big bed too early, he might go dawdling around at any time (and you don’t want that).

There are many books to explain to children that night time is for sleeping. Pick any of the classics (Goodnight Moon, etc) or follow our recommendation, tell your child you will read him a story and that he will have to go to sleep afterwards. Be firm, and don’t read a second story! You can also resort to hypnotherapy, either by consulting a therapist or by trying yourself thanks to a book written by our specialists here at Dodow: Oda and the Marvelous Dodo.

Subconsciously, your child associates you to his toy, who is a perfect replacement to allow you to go about your life unhindered. Only the toy affords your child the necessary autonomy to fall asleep on his own.

After 1 year, your child will start being afraid of the dark. Don’t make fun of him, of course! It is an ancestral fear that is actually a different shape given to the fear of the unknown. Explain to your child why there’s no reason to be afraid and leave a door ajar or a nightlight to humor him.

If you can have him sleep in the same room as somebody else (a brother, a sister, or even a pet), that’s great too.

Starting at the age of six, the age when your child will start going to school, he will become largely autonomous. Sleeping nowadays is mostly about keeping a regular rhythm and staying reassuring but firm so that your child doesn’t feel like he can bend you to his whimsy with his whining.

Some screens prevent you from sleeping, but your child is incapable of giving himself limits on his own. To prevent him from being kept awake by the nefarious effects of the blue LED lights, forbid tablets, computers, TV and smartphones at least 2 hours before bed.

The extinction technique is complicated way to say “you just have to say no”. After 6 years old, your child is scared of being left alone, but he’s also scared of being bored when sleep does not come. Bring him his first glass of water if he asks, even a second one, but know when he’s pushing it and let him sleep like a big boy or girl. 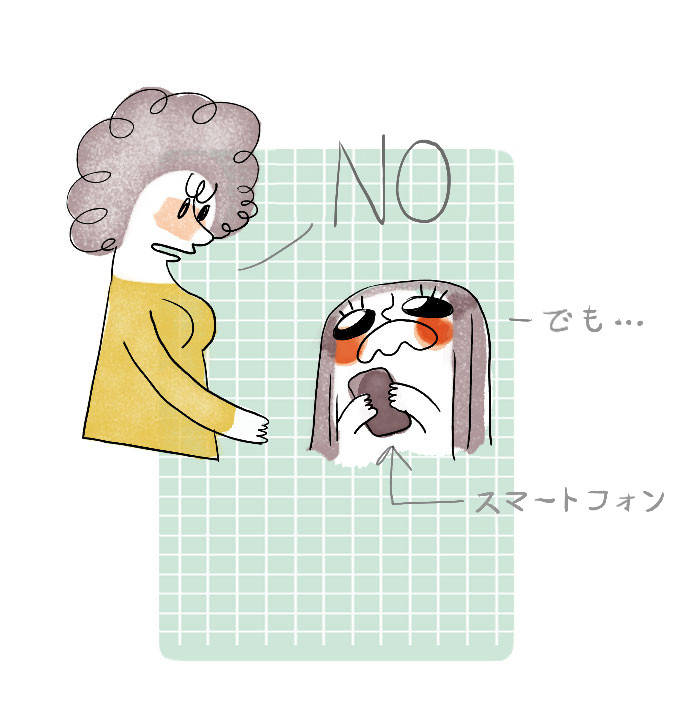 Teenagers, who are wild and deceitful creatures, will do their best to stay awake later and later. As a result, 25% or teenagers sleep at least 7h per night according to the INPES, and 30% suffer from being chronically sleep deprived. In reality, it is not entirely their fault…

When your teenager refuses to go to bed at 9PM, it’s not just that he wants to annoy you: because of the hormonal changes of puberty, his biological clock is shifted compared to an adult’s. When night falls, he is still full of energy, and he won’t feel the need to sleep until a few hours later…

Only one solution: good habits and good will. The blood of your blood is now old enough to make himself herbal tea, try cardiac coherence and other zen relaxation exercises on his own. But the question remains… will he want to ?

It might happen that the fruit of your loins (even though he denies any relation to you out in society) hates school – the mere idea of showing up causes him such emotional distress that he cannot sleep a wink.

Because we were all forced to go to school and have yet to die from it does not mean that your teenager is lazy or cowardly. School refusal is a real condition that affects 5% of teenagers in western countries. Fear of failure, fear of being judged, or even bullying are all very good reasons to not be able to sleep (remember that a child is a person with no filter that can be very cruel, even when they don’t mean it).

If you suspect that your child is having difficulties (distinctive signs are non-attendance, breaking out in tears, panic attacks), don’t be afraid to immediately ask for help with a child psychiatrist.

When people say teenagers are addicted to screens, it is rather that they are addicted to their friends: 73,9% of the 12-14 year olds who wake up in the middle of the night take advantage of the opportunity to turn on their smartphones, and 15% wake up on purpose to send each other texts. If you’re used to forbidding screens after a certain time, keep going ! Otherwise, have you thought about starting ? 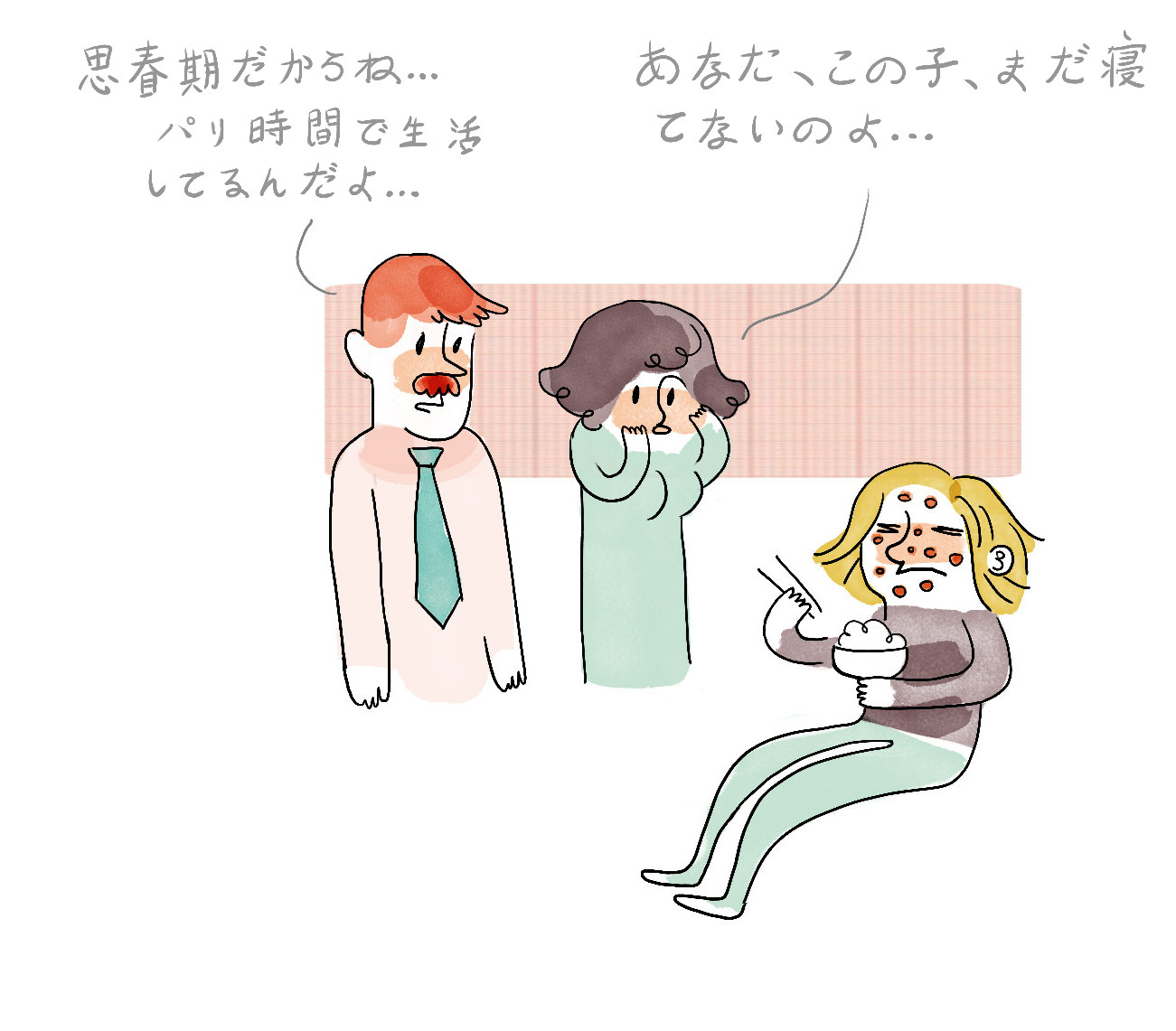