As soon as you learned you were pregnant, perhaps you panicked. Pregnancy insomnia and many other things plagued your mind. Should I throw out everything in my fridge? Will I accidentally poison my baby ? I only want to eat chips and asparagus puree for a week, is it a good idea? (No. It's a terrible idea.)

Let's start by the most frightening part: things you shouldn't eat.

You will certainly find studies online that tell you a glass or two per week can't hurt you, and that if you stay reasonable alcohol is allowed. However, these results are still debated, and you don't want to bet double or nothing on your baby's brain. Don't play the odds for a little glass of wine, drink water!

Alcohol easily goes through the placenta: your baby risks fetal alcohol syndrome or neurological problems because alcohol targets the fetus' brain and nervous system as a priority. (Freaking out yet? You should.) Stunted growth, risk of facial anomalies, learning deficiencies, and later on depressive tendencies, anxiety, and a variety of behavioral and emotional problems all affect children whose mothers drank a lot of alcohol during their pregnancies. There are also strong chances for babies to be born premature at a lowered weight. 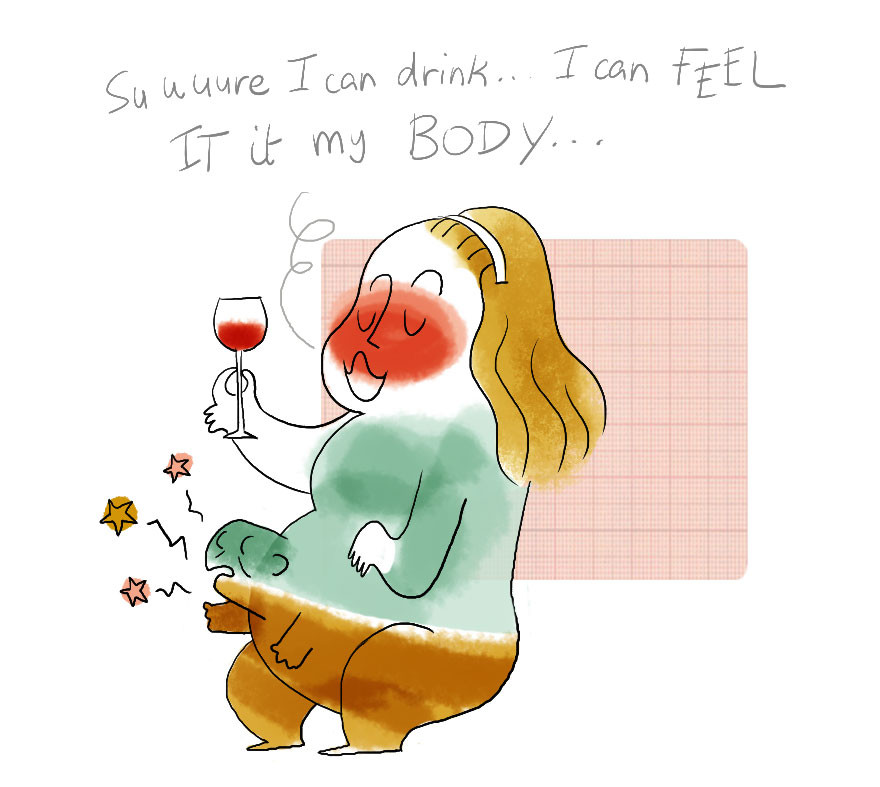 These drinks contain stimulants (theine or caffeine are the same thing) and stop the food you eat from absorbing iron and calcium. That's too bad, because those things could have been useful to the baby! You musn't exceed 300mg of caffeine per day. Know that a standard cup of coffee contains about 179mg of caffeine, a cup of green tea contains 30mg of caffeine, and a coca cola can contains 36 to 50mg of caffeine. 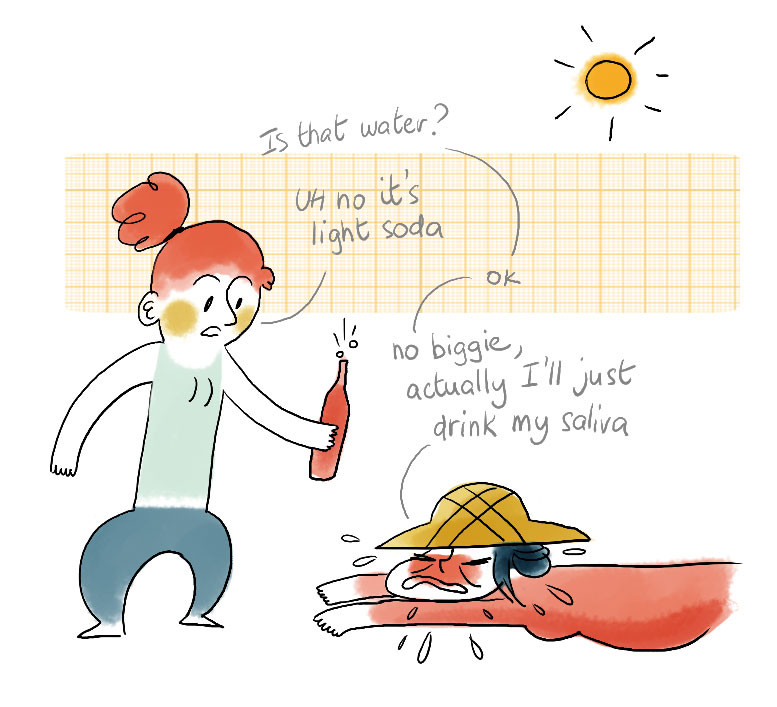 Plants and herbal teas with side effects

After reading about tea and coffee getting crossed off the list, you're probably already planning out all the herbal teas you can think of as your only solace. Unfortunately, most herbal teas won't make the cut either. Some herbal teas still have undocumented effects on pregnancy, and some can stimulate the uterus, affect your hormones, increase your bleeding, or even cause a miscarriage or hypertension.

Some plants contain phytosterol, a substance close to cholesterol. It is found in plants like soy, corn or sea buckthorn. It is said it lowers the levels of cholesterol in the blood. In reality, you should follow a strict diet to get the real benefits from phytosterol (and ask for your doctor's opinion). Try not to take any when you're pregnant, nor give any to children under 5 years of age: phytosterol diminishes the vitamin A in your body. Vitamin A is useful for a good immune system, healthy skin and eyes.

Here is a long list of plants you shouldn't eat during your pregnancy (or use as oils on your body, gels, herbal teas...) that you're likely to find on the market.

For more exotic plants, make sure to check with a reputable source! 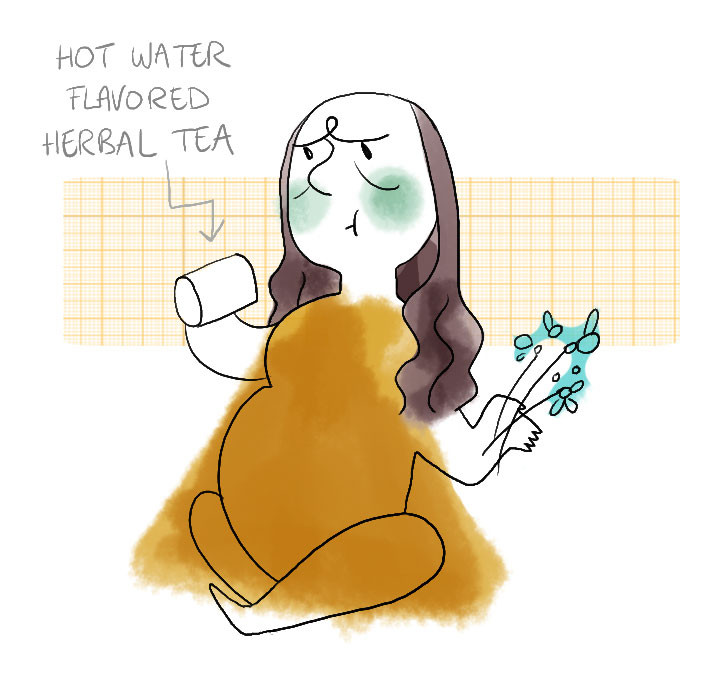 Avoid foods that are too sweet or too fatty

Biscuits, pastries, candy, chocolate, excess butter or oil, all this must go out the door with the new baby in tow. More than ever you should eat healthy and balanced meals - maternal obesity makes mother and child at a very high risk for a lot of issues. Hypertension, toxemia, urinary infections, thromboembolic accidents...

After having gone over vitamin A deficiencies, we'll now talk about how excess of vitamin A isn't good either. Cold cut livers must be avoided at all costs (pâté, mousse, terrine, rillette, all those French specialty cold cuts made from ground liver) because they contain too much vitamin A and increase your risks of catching listeriosis, a terrible disease that attacks the baby's nervous system.

In regards to dietary supplements, don't touch them without the a-O.K. from your doctor! Your daily doses of vitamins should be enough thanks to your daily food intake. You wouldn't want to disrupt your baby by giving him random vitamins. 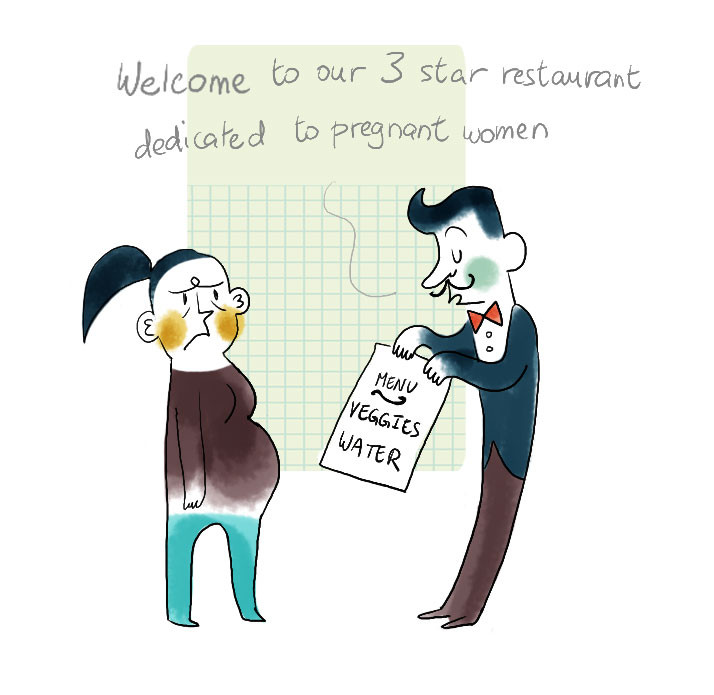 Raw foods are a source of bacteria which can give your child a variety of diseases because his immune system isn't very efficient yet. Toxoplasmosis in particular (and also listeriosis) can often go unnoticed by the mother as they manifest like symptoms for the flu, but can have disastrous neurological consequences on the baby.

Fatty fish absorb most pollution in their natural environment, however they are full of omega 3 which are good for the baby. To have the best of both worlds, don't take anymore than twice a week, and only mackerel, trout or sardines.

Avoid tuna, shark, marlin or swordfish, which have too much mercury. 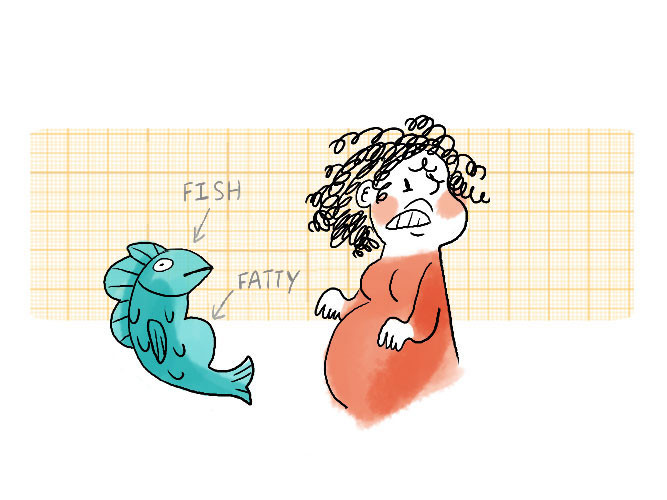 If you have a family with allergic tendencies, try not to eat anything they're allergic to during your pregnancy, it could trigger an allergic reaction in the baby! Also don't bother with low-fat foods (which train your baby's taste for extra-sweet foods) and artificial sweeteners (like aspartame, which replaces sugar in coca cola for example and is very dangerous).

When you're pregnant, don't forget to wash your hands, wash the counter where you prepare your ingredients and everything that could have touched bacteria, wash your tools, and wash your fruit and veggies properly as well.

All right, let's get real. After all this, you're probably thinking there's not that many things left for you to eat in the world during those nine months. All you need is love, right? :)

PS: Just kidding, we're not gonna leave you to starve like that! Take a look at our article about things that are good to eat while pregnant, run along and eat to your heart's content! 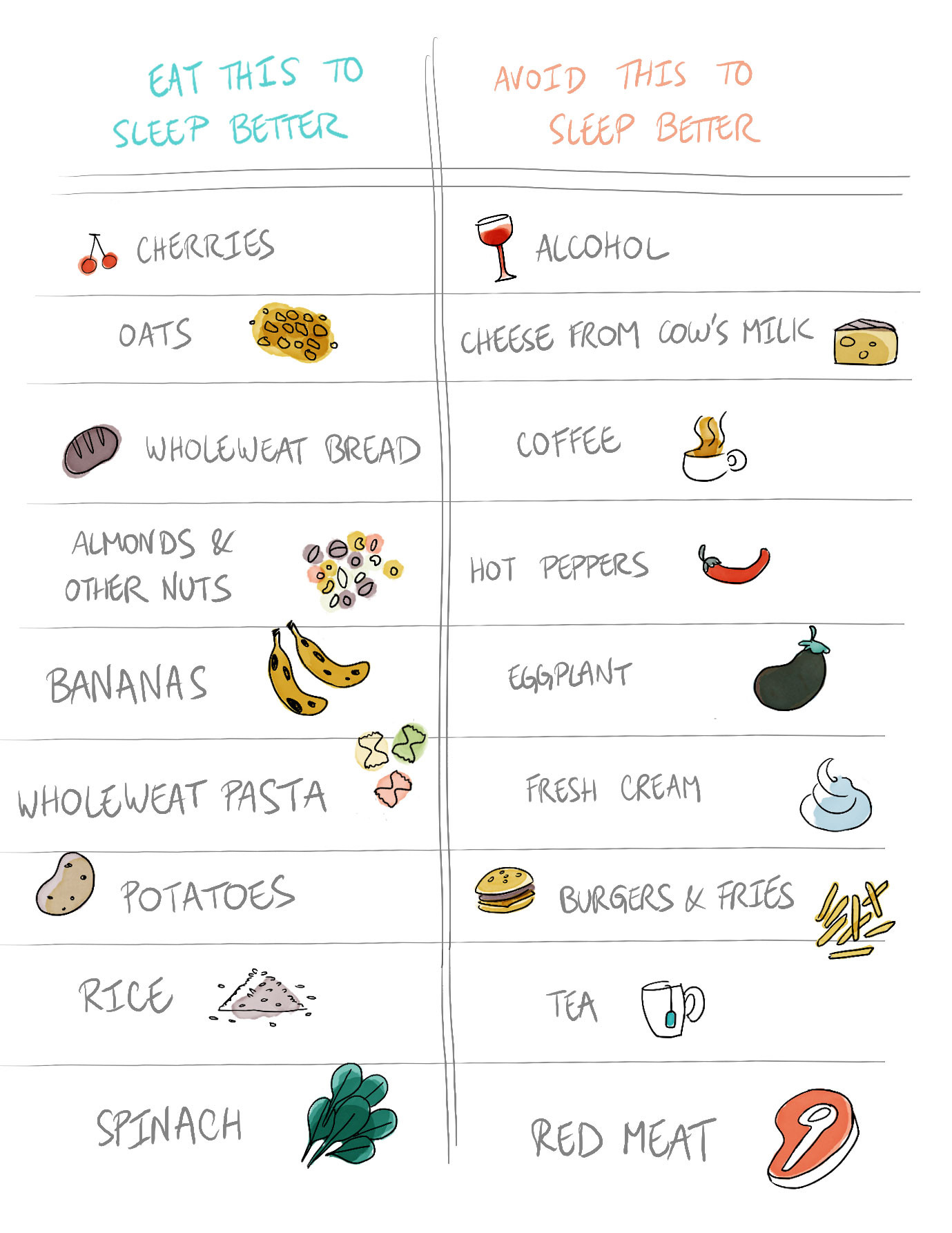 On the same topic:

Did you know? You can do yoga while pregnant!

Don't know what to eat while pregnant? Check out this list!

Find out which sleeping position suits you best while pregnant

Don't trust sleeping pills? You're right about that!

Can't fall asleep ? We'll tell you about natural solutions to fall asleep while keeping your baby safe and sound.

Check out these 5 sleeping positions for sleeping while pregnant. We'll tell you the perks of each one to fall asleep in the most comfortable way !